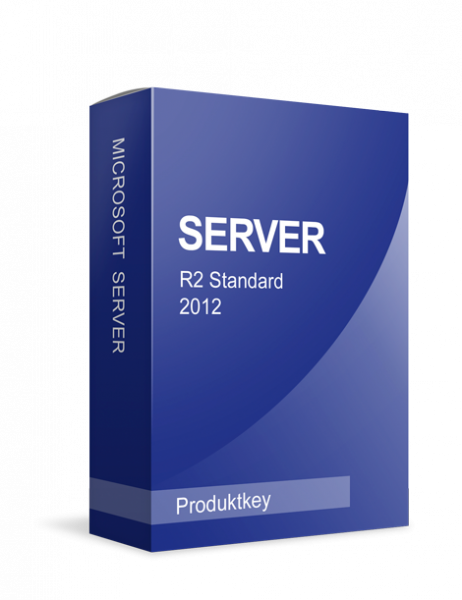 Advantages at a glance

Windows 2012 Server Standard R2 is designed for small businesses and larger enterprises. That's why you can increase scalability and performance to run business-critical workloads. There is also the feature of robust recovery options for failover. An additional improvement of Windows Server 2012 Standard R2 is the development of applications and websites, as extended support has been established for open frameworks.

The developers provide you with a virtual desktop infrastructure. Despite the new features and numerous optimizations in Windows Server 2012 Standard R2, the system requirements are the same as in the previous version. Microsoft offers the possibility to install the server operating system on two physical processors and two virtual machines. This is a plus point, which is particularly noticeable in virtualization and which allows you to reduce many costs.

Other innovations in Microsoft Windows Server 2012 Standard R2 include the modern user interface, which provides an optimal user interface for touch screens, the Windows Azure program for server backup in the Azure cloud and the improved Task Manager to guarantee more performance. You will notice further optimizations in PowerShell 3.0, which provides improved management of system settings. Additionally, this feature becomes standard in Windows 2012 R2 with the Internet Information Service 8.0 for extended validation certificate management and the new protocol version SMB 3.0, which provides faster and more stable file sharing access.

Windows Server 2012 R2 has a minimum CPU requirement of a single CPU with at least 1.4 GHz and a 64-bit processor core. ... Further minimum requirements are 512 MB RAM, a 32 GB disk partition and a standard Ethernet network card (10/100 Mbps or faster).

Legal Notice
Important note: According to the Microsoft licence agreement, the product key is intended for... more

Important note: According to the Microsoft licence agreement, the product key is intended for one-time activation. The period of use is unlimited as long as the product is used on the same device. If the computer is reformatted, reinstalled or any changes are made to the hardware, there is no longer any guarantee that the key will continue to function on the PC. In addition, you are prohibited from activating the key on several devices, see Microsoft Terms of Use ( https://www.microsoft.com/en-us/legal/intellectualproperty/copyright/default.aspx ). See also Microsoft Privacy Policy ( https://privacy.microsoft.com/en-us/privacystatement/ ).You can find the licence conditions for your respective product at https://www.microsoft.com/en-us/useterms. There you can select the product for which you purchase the product key and view the specific licence conditions. For information: We are selling a legally purchased item here. It is not an item from a volume licence. If the item is marked OEM in the item description and/or title, the corresponding copy of the software whose licence key you purchase has been removed or rendered unusable from all devices, media, and other storage locations, including cloud services. If the item has not been marked OEM in the item description and/or heading, the original purchaser has also only received the product key and downloaded the software from the manufacturer. Also in this case the copy belonging to the product key has been removed or rendered unusable from all devices, data carriers and other storage locations including cloud services. You may download and install available improvements and updates to the Software from the Manufacturer's website.The requirements of Art. 5 para. 1 of Directive 2009/24/EC for the purchase of an "exhausted copy of the program" are fulfilled. The purchase of the product key enables you to use the computer program properly.OEM versions: (Original Equipment Manufacturer) offer the buyer the enormous advantage of purchasing the same software at a much lower price. In Germany, the purchase, distribution and use of OEM versions is completely legal. The trade with OEM versions without binding to hardware is legally permissible. Since 2011 the trade from Europe to the whole world is allowed. The available operating system CDs from us come from manufacturers such as Dell, HP or Fujitsu and contain the original software. We purchase these CDs with original licence keys and can pass them on to our customers at extremely low prices. The performance and handling of the operating systems are identical to the retail version. The only difference is the type of packaging and that you don't get support from Microsoft.